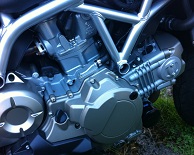 If the fuel injection system ( FI ) warning light on the instrument cluster illuminates when the motorcycle is running, a fault has occurred in the fuel injection/ignition system. The engine control module ( ECM ) will store the relevant fault code in its memory and this code can be read as follows using the self-diagnostic mode of the ECM. While the engine is running and the motorcycle is being used, the FI light will come on and stay on. When the motorcycle is on its side stand and the is running below 5000 revs the FI light will flash, the pattern of the flashes indicating the code for the fault the ECM has identified.

If the engine can be started, place the motorcycle on its side stand and then start the engine and allow it to idle. Whilst the engine is idling, observe the FI warning light on the instrument cluster.

If the engine cannot be started, or to check for any stored fault codes even though the FI light is not illuminated, remove the seat to gain access to the fuel injectionsystem service check wiring connector, which is a white 3-pin ( 2 wire ) single sided connector inside the rubber boot close to the tail light.
Ensure the ignition is switched OFF then bridge the outer terminals of the service check connector with an auxiliary piece of wire.
With the terminals connected make sure the kill switch is in the run position then turn the ignition ON and observe the FI warning light.
If there are no stored codes the FI light will come on and stay on.
If there are stored fault codes, the FI light will flash.

The fuel injection system warning light uses long ( 1.3 second ) and short ( .5 second ) flashes to give out the fault code. A long flash is used to indicate the first digit of a double digit fault code ( i.e. 10 or above ). If a single digit fault code is being displayed ( i.e. 1 to 9 ) there will be a number of short flashes equivalent to the code being displayed.
For example, two long flashes followed by five short flashes indicate the fault code number twenty five. If there is more than one fault code, there will be a gap before the other codes are revealed ( the codes will be revealed in order , starting with the lowest and ending with the highest ). Once all the code(s) have been revealed, the ECM will continuously run through the code(s) stored in its memory, revealing each one in turn with a short gap between them.

Once the fault has been identified and corrected, it will be necessary to reset the system by removing the fault code from the ECM memory. To do this, ensure the ignition is switched OFF then bridge the terminals of the service check connector as before.
Turn the ignition ON then disconnect the bridge wire from the service check connector.
When the wire is removed the FI light should come on for approximately five seconds, during which time the bridging wire must be reconnected.
The warning light should start to flash when the bridging wire is reconnected, indicating that all the fault codes have been erased. However, if the light flashes twenty times then the memory has not been erased and the procedure should be repeated.
Turn off the ignition then remove the bridging wire.
Check the operation of the warning light ( in some cases it may be necessary to repeat the erasing procedure more than once ) then replace the seat.